Other kind of studied/practiced fields

I am a French Software Engineer, graduated with a CS Engineering degree from the University of Nantes.

This website aimed to help me find an internship and a job. That was a long, difficult and infuriating process. You might be a student in this situation, so my best advice would be to be persistent. Even if you receive 100 rejections, continue to prepare and apply to pursue your dreams. Your luck will be increased by your hard work. I wish you well :)

This portfolio won't be updated anymore, please look into my LinkedIn for up-to-date information and contact. 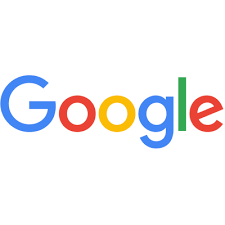 Software Engineer Intern - Google2020 Mountain View Worked in Traffic Quality. Extended the abilities of the team to experiment and improve spam detection models by developing TFX pipelines. Tested various models and new architectures to find enhancement in terms of AUC and model stability.
Side project : Updated the Transfer Learning tutorial of tensorflow.org, to ensure the best practices and add new explanations for the users. 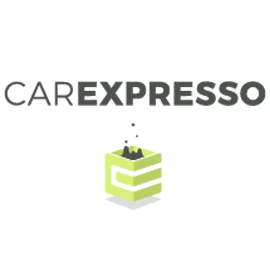 Software Engineer Intern - CarExpresso2018 Nantes Worked at CarExpresso (startup which aims to be an interface between the immense vehicle market and the customers).

Made several crawlers, but mostly developed an algorithm that detect similarities between vehicle ads, normalize our data stored on a postgresdb and find the correct model-version of a vehicle ad. 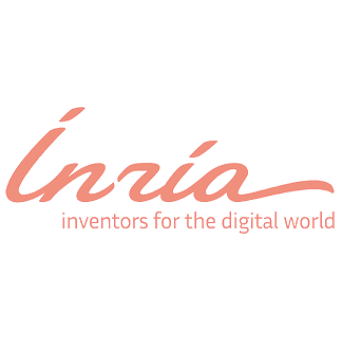 Software Developer Intern - Inria Vannes2017 Vannes Inria is the French institute for research in computer science, worked in one of its laboratories, Irisa Vannes. Worked on the creation of a computer tree library for the purpose of satellite image analysis. (Applying algorithms built through thesis or papers in C++) 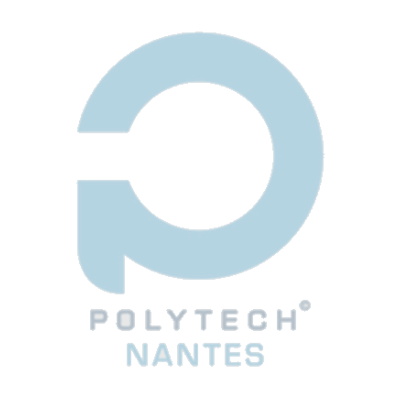 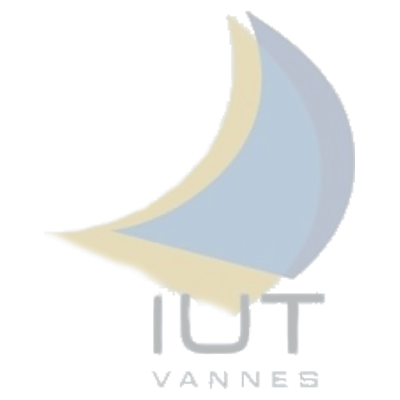 Associate degree in Computer Science at Iut of Vannes2015-2017Technicals and advanced IT courses. (Obtained a French 'DUT en Informatique') 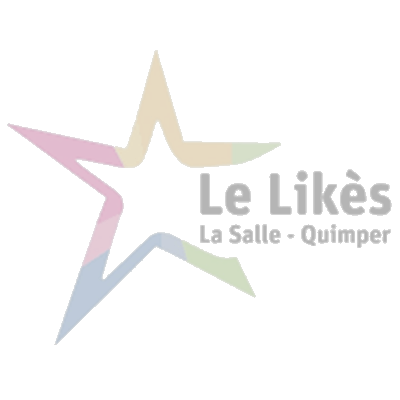 I participated in a hackathon powered by the ESA which aims to imagine some new space startup. We presented a pretty cool eccentric project called ‘ReSpace’, with the idea of a reusable space research station. 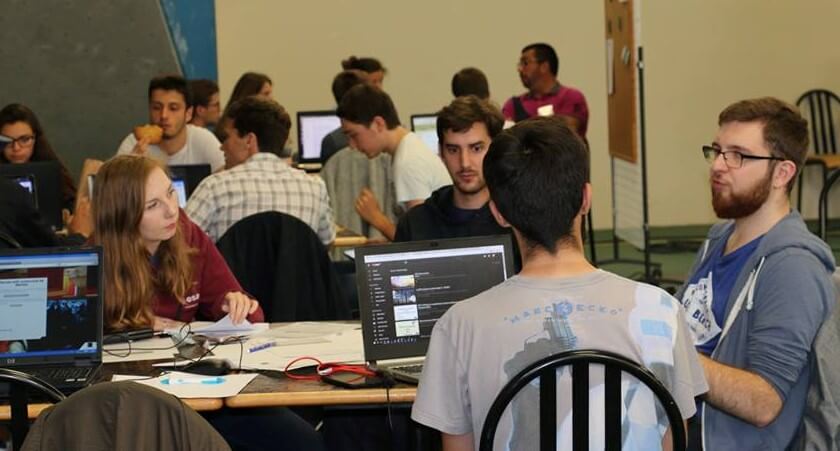 PolyHash Code was an internal competition in the Polytech Nantes IT department, the objective was to present an algorithm which has the best score for the 2017 GoogleHashCode final challenge. I was in a 4 people team and we reached at the end of the competition the 1st place amongst 12 teams.

Our maximum score of 546 154 780 placed us at the 5th position in the real Google competition, but we had several weeks to solve this problem. Below a video, that I created(for the purpose of the competition), which present our work.

My school interviewed me about my education and career path. (Interview)

With the project 'Torii', I participated in an important French competition which judges the qualities and the innovation of hundreds of high school student’s projects. 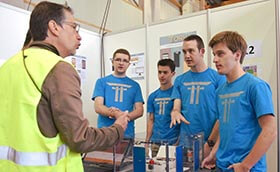 'Les Entrepreunariales' is a 4-month competition and formation that I participated with a friend while I was studying at Vannes. Through it, I have learned the basis of the creation of a company in France, manage its finance and legal aspect and the basis of marketing.

Three years after participating at the Olympiade as a student, I participate as a judge. (The Olympiades projects are presented to a panel of juries, people coming from industry, research and some high study students.) That was a really cool experience to see the other side of that competition and to discuss the realization of these projects.

For my final year, I built during 3 months Knowledgeable. A VR application that aims to empower its users with the "method of Loci" (also named Memory Palace). With this software, you can understand, practice and use this method to learn various lists of concepts. A draft of research paper is associated with the conception and development of this application. That was particularly exciting has it was my first experience with Unity and it allowed me to test various technical aspects (Oculus SDK, Unity Serialization, Events, Scening, HUD, Virtual HMI, C# http request, Threading/Asynchronous, C-Sharp) 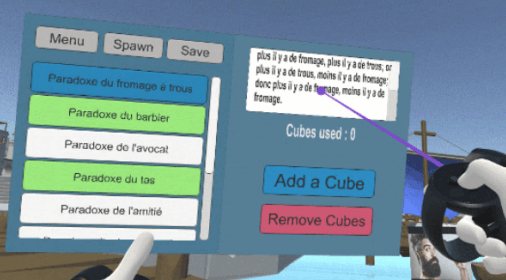 As part of a little assignment at polytech, we were requested to develop a neural network with Keras on a little dataset to detect sign language digits. I added a WEB live version of this detection using TensorflowJS. (example in the gif bellow)

I worked for 1 week with two other CS students and three design students to develop an experience in the context of a contest at Polytech. The objective was to produce a remarkable experience on the changes in the Nantes area. I took the oportunity to develop this project with ThreeJS to discover OpenGL. You can discover a demo >> here << (bellow a video of presentation made by Polytech)

With two other students I made an extremely simple Bibliography in Latex of the differents works on the Conditional GANs and how to improve the performances. 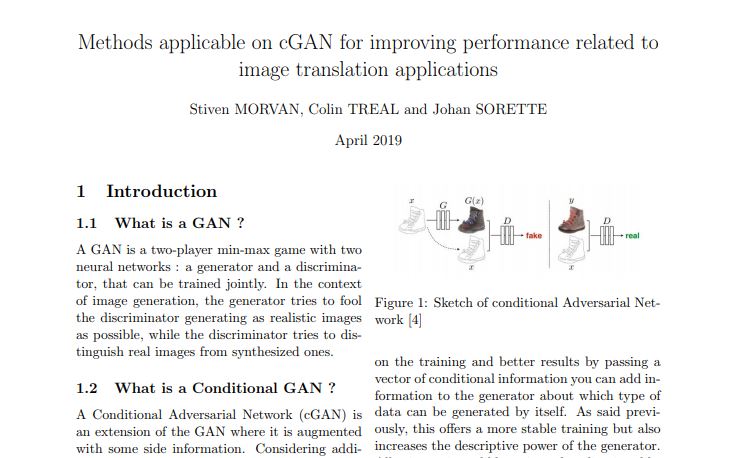 At Polytech, I worked on a DeepLearning project with 2 other students and in collaboration with Incepto-medical and Nantes Hospital. This project aimed to build and train neural networks to detect liver cancer in radiological images.

It was a huge and extremely interesting project for me. Through it I discovered a lot of computer vision techniques like mathematical mortphologies, YOLO, R-CNN, U-Net... (I worked especially on this architecture). I used many differents tools like PyTorch, MedicalTorch, TorchVision, Matplotlib, Scipy, Numpy, Tensorboard. But also some medical specific technologies like Slicer3D, DICOM, nrrd, Nifty. In bonus, as I wanted to test a 3D U-Net model, I implemented some dataLoader, transforms and model in medicaltorch. 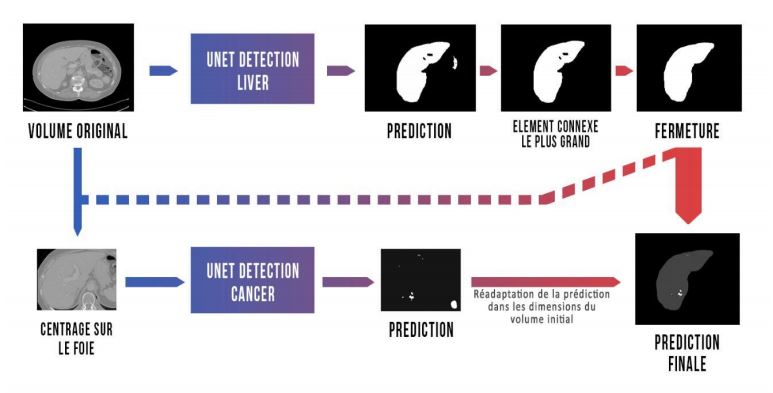 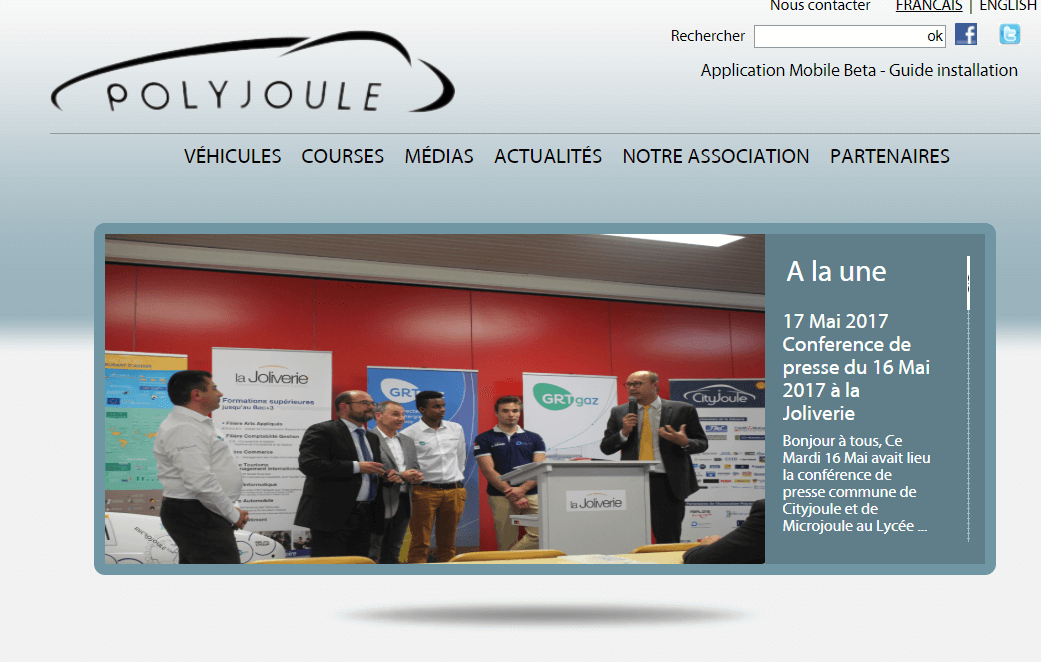 I make a simple re-design of the Polyjoule website ( a University association which develop an optimal hydrogen car). 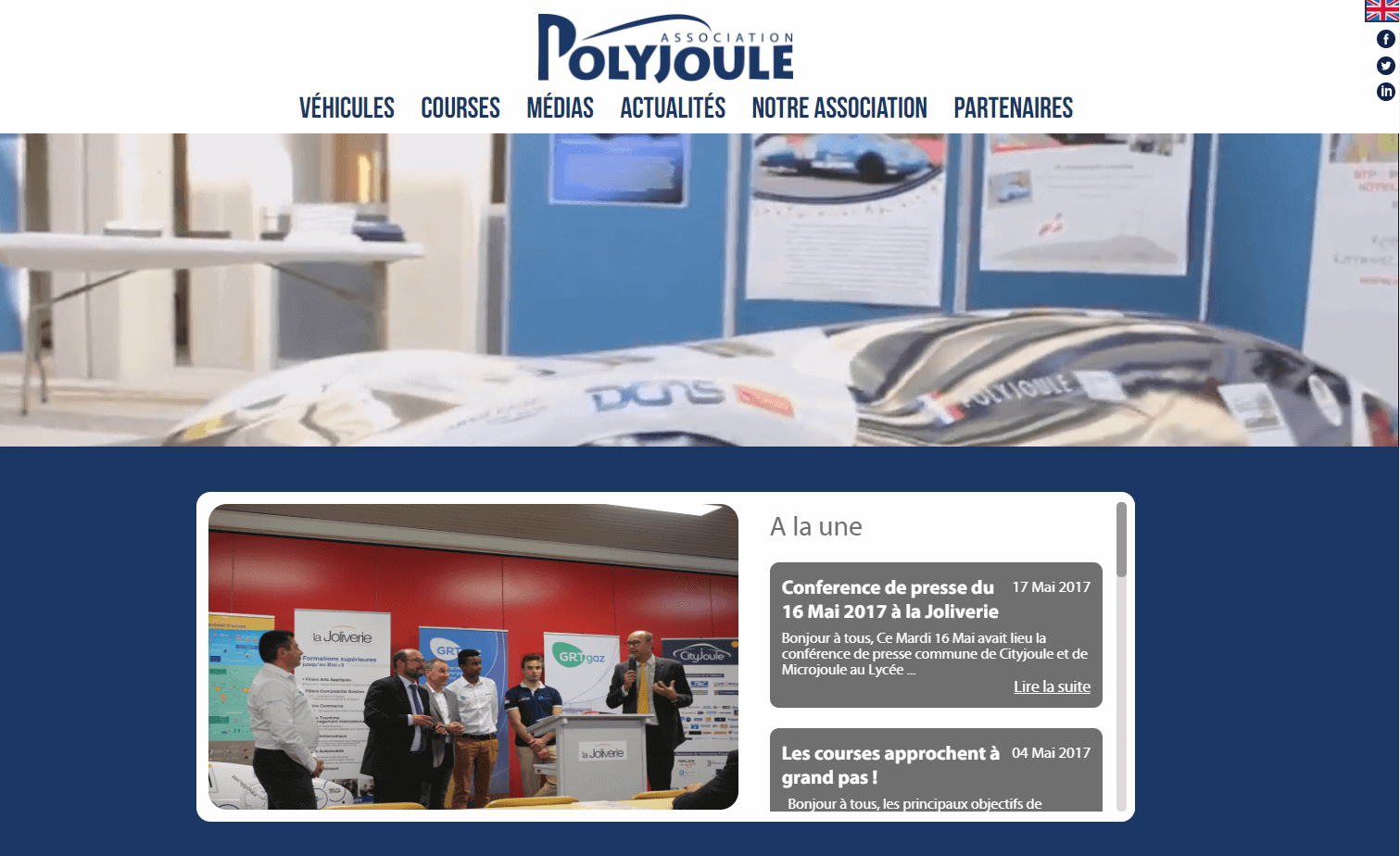 In my second year of study at Vannes, I became TL of a 4 people team to develop a website connecting doctors and their substitutes. A huge project where I used Google Map API, AngularJs, Node, Express, MySQL and Bootstrap.

For a first year's projects at the IUT of Vannes, in pairs, every IT students have the goal to create a Software version of the Blokus game in 3 weeks. We did our best to implements the maximum of features. The main objective was to have a functional game and the optional part was to have an AI. We have finally render a version with 3 level of AI, the possibility of creating new structures, and a LAN game mode (which was satisfying has we were the only team to use asynchronous/server/network technologies). 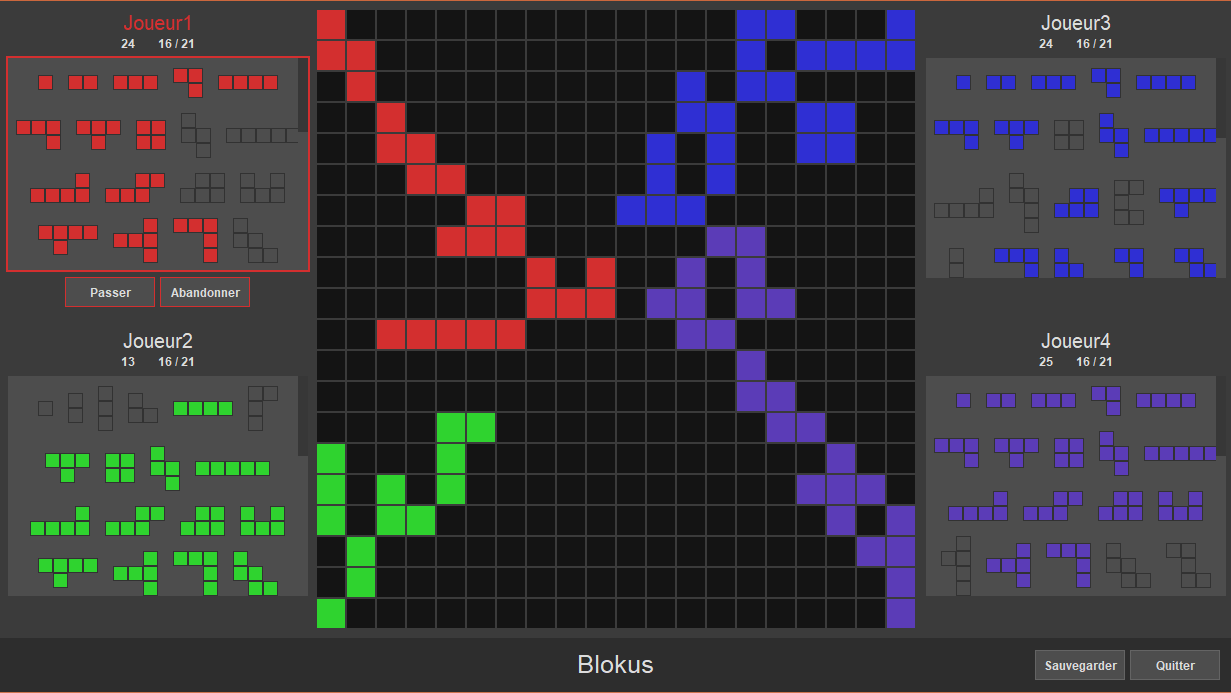 In the context of a day of conferences at the IUT of Vannes I worked with some friend on the realization of a video which presents the data storage evolution.

Before this one, in my first studies year after high school, I built a website to present myself. You can see it here.

(Done during hight-school)
It was my first big project, with 3 other people we create a system which aims to modernize infrastructures doors access (Add a secure module on any door of a building, opening them with a smartphone application, centralize the account and provide an interface to manage the rights of each door for each user).

I essentially worked on the application. I built it from scratch knowledge with html/css/js/cordova, used many DOM manipulation and AJAX (absolutely no framework for the css or js, I wanted to learn deeply the basics technologies before using some libraries). Without any exterior help I tried to do my best for this application, that was intense and I’m really proud of the result. You can see a demo here.

In the middle of my high school studies I did a website to present the speciality of my formation. You can see it here. That was my first experience with html/css, so it’s quite experimental.